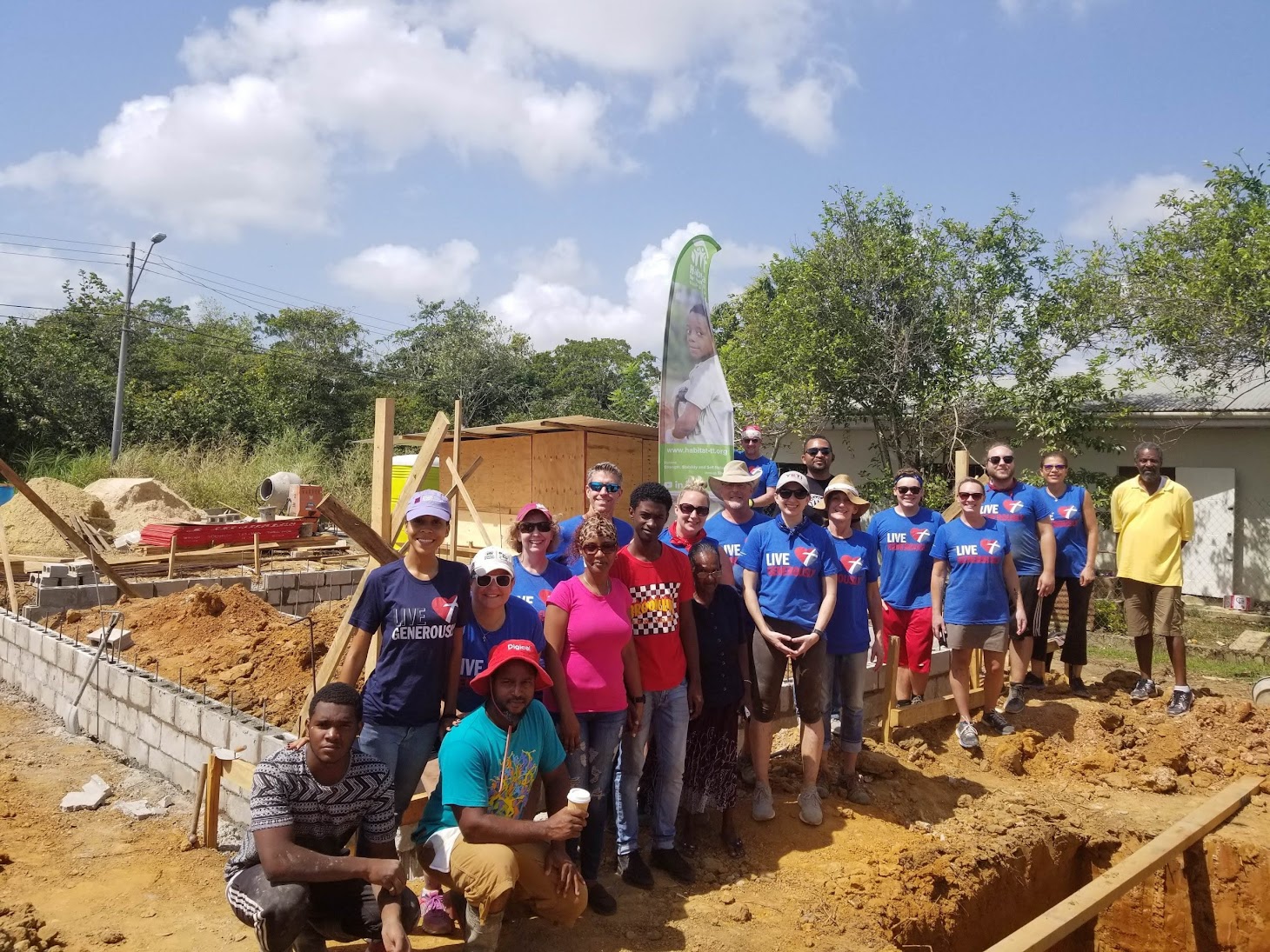 This morning we awoke to partly cloudy skies to start our last build day on Marie’s house.  The Yogis met for their final stretch session before heading to the work site. The team was moving a little slower than the start of the week, but still eager to get to the house site.

On site we got our block brigade going early to transport more block from street side to the foundation. While part of the team worked with the contractors to continue laying the three courses of foundation brick that was started Thursday, the other team members continued to haul dirt from the street to the foundation. Once the foundation has set, the dirt will be used as backfill. When the foundation was complete, we poured concrete into the cores of the blocks. Etson, one of our masonry contractors, complemented Shea on her masonry skills. She buttered to perfection and “rested” the blocks into place. On the other hand, Amy had Etson take her trowel away from her. Poor Amy!

It has been a delight to meet Marie’s family this week. Today we met the final member of her family, son Nathaniel. Nathaniel is nineteen and is a college student studying Occupational Health and Safety.

After lunch, Katia and Giselle, the volunteer and alliance coordinators from Habitat Trinidad and Tobago, held a brief dedication ceremony with Marie, her son and father and our team. Marie spoke about how grateful she was that we traveled so far to come work on her home as part of Habitat’s Global Village and how thankful she was for the work we had completed. Marie also presented each volunteer a certificate in recognition of our efforts to help families in Trinidad and Tobago build strength, stability and independence.

It was hard telling Marie, Christian and the contractors good-bye at the end of the day. We were all blessed to get to know them, work alongside and share fun with them.

Our evening dinner was at Eljo’s located on “THE AVENUE” and the entrees were delicious. The chef was a former US Marine. Dinner conversation focused on getting Q-Dog’s prom date’s name so we could help him with his “promposal.” We failed. Tracy pointed out that it would be really tacky to create a promposal “to whom it may concern”.

Our work blog is complete but keep reading if you would like to learn a little more about Marie’s neighborhood, some Trini Talk and other tidbits we’ve picked up this week.

Marie’s Habitat home is in the city of Chaguanas, south of Port of Spain, in a neighborhood called Cashew Gardens. Marie purchased her land from a government land settlement program. She applied for a Habitat house in 2013 and has been waiting patiently ever since.

On day one of the build and every day since, a lovely elderly woman named Ramigan (she said to call her Thera) has come to the build site to sit under our tent and watch us build. When Thera moved to this neighborhood 20 years ago, the land was covered with cashew trees. She would harvest and sell the cashews. She sadly explained that as the neighborhood has developed the cashew trees are disappearing. We quickly learned why Thera was so interested in Marie’s house build. Thera is also a Habitat homeowner. Twenty years ago, Habitat helped her with funding to buy materials and labor to have a house built. At that time, Habitat was not constructing homes.

Thera was a wealth of knowledge about the area as she was a former village council president. She shared that the Cashew Gardens neighborhood has plans to build a school and a park across the street from Marie’s house in what is now vacant overgrown property. The community center, which has already been built, is host to many neighborhood activities.  She also mentioned the community was building a greenhouse to not only supply food for the community but to give the neighborhood mothers a chance to work while their children are in school. In addition, they can sell the produce and make additional income for their families. Today we learned from Jennifer Massiah, the National Director of Habitat for Humanity of Trinidad and Tobago, that Habitat for Humanity partnered with a local college and other businesses to build the greenhouse. Habitat’s project leader for Marie’s house, Christian, is also leading the construction of the greenhouse. The greenhouse will be equipped with solar panels so that once it’s up and running, it will power the community street lights. It’s awesome to see the programs Habitat for Humanity is involved in.

“GOD IS A TRINI”!  We heard that expression the very first day and several times a day since. Trinis feel they are very blessed as the hurricane line falls north of their islands and for the most part their weather is beautiful. Each day as we worked, we would get relief from the hot sun with sporadic cloud cover, nice strong breezes or a few rain drops (God is a Trini).  Trinis are also very thankful for what God has given them and they in turn share what they have with other islands in the Caribbean that have been devastated by hurricanes and earthquakes. This week has us thinking maybe GOD is a Trini! 🙂

Trini Talk – It was fun to learn some new words and phrases this week from our new Trinidad friends:

This week has been an awesome experience! Our team of young (Q-dog) and old (G-money) and in between, of various backgrounds, experienced versus not, type A personalities and “others” came together to build a house in Trinidad. We all came to serve but are leaving with so much more. We have fallen in love with Marie and her family, the Trini people and their country. Our volunteer group has grown into a family, caring for each other in sickness and in health and coming together to build a firm foundation for Marie’s house. We are BLESSED!

Special thanks to our team leader Josie and our Trinidad hosts Giselle and Katia for taking care of us and attempting to keep us in line. 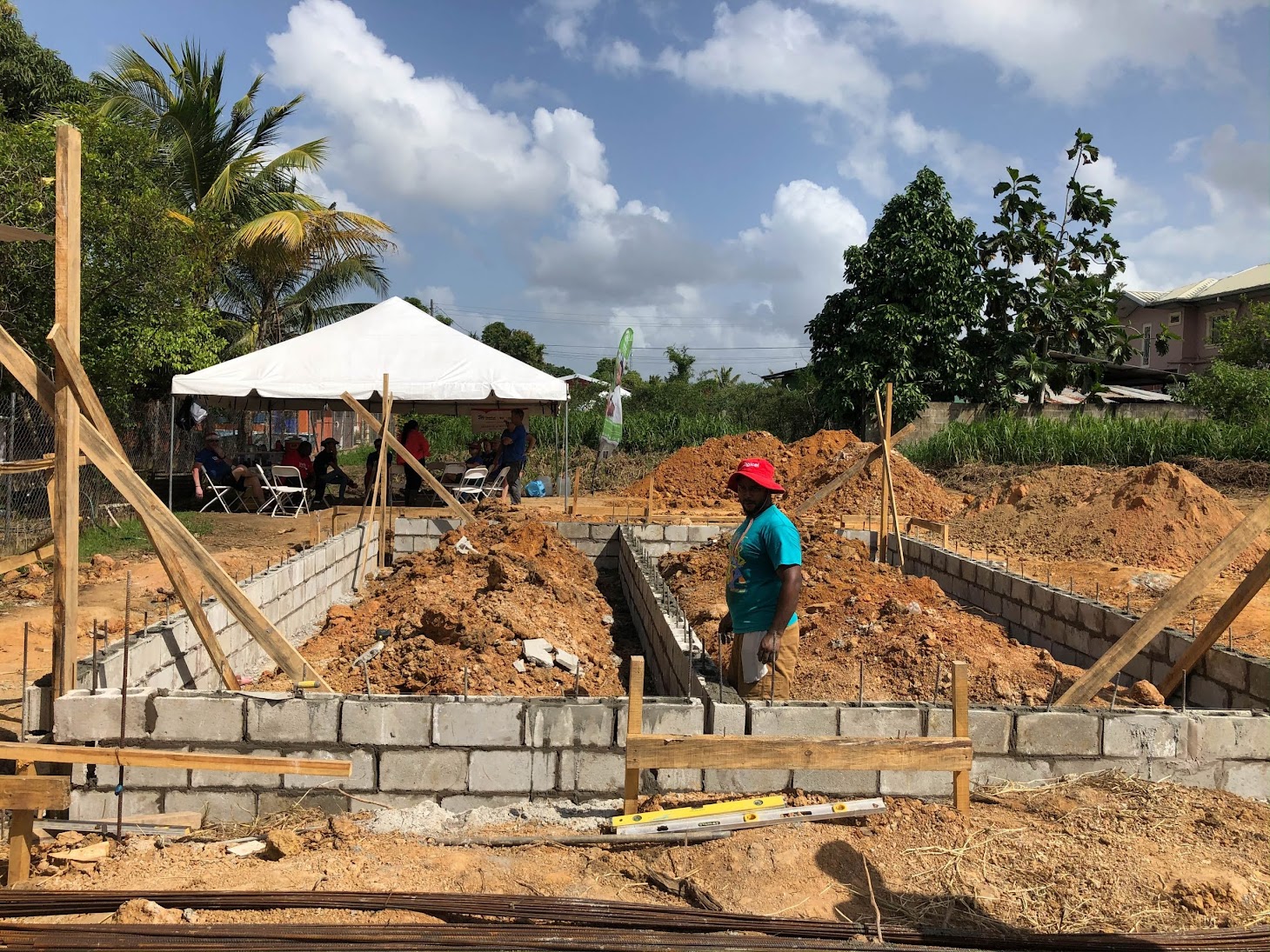 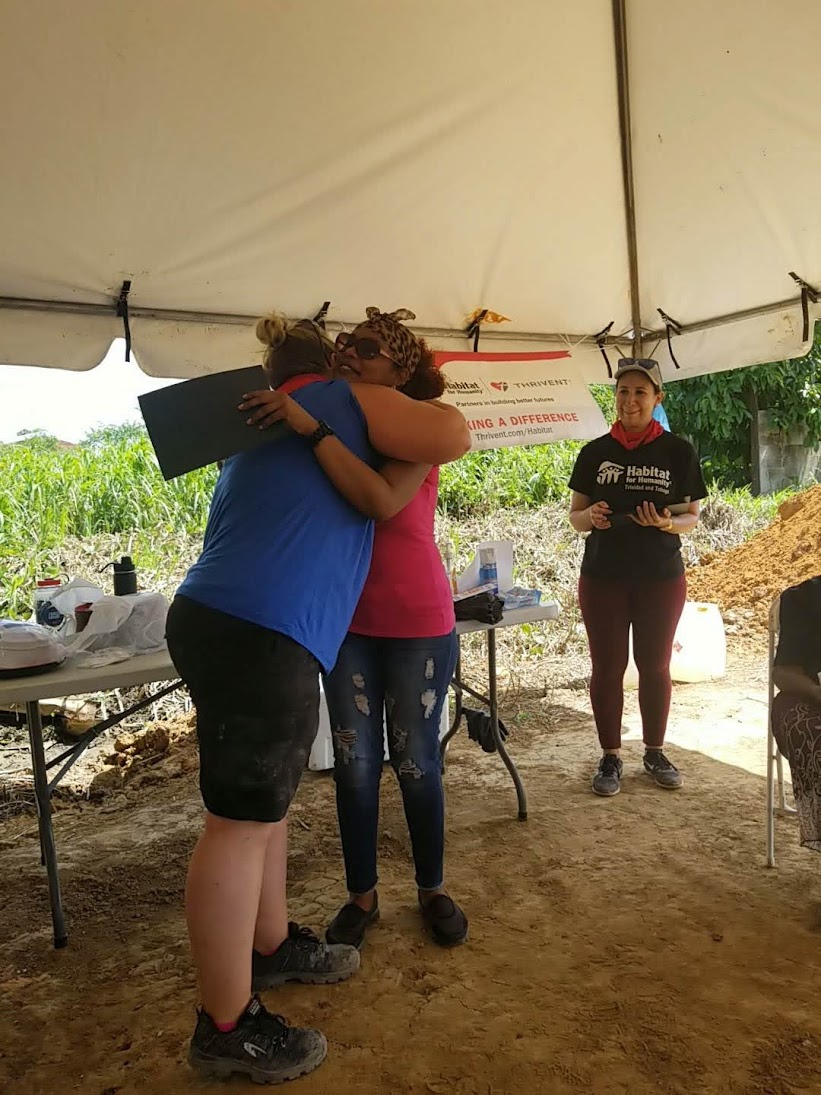